Criccieth castle was built at the beginning of the 13th century by Llywelyn the Great and sits atop a rocky promontory that dominates Criccieth itself and the waters of Tremadog Bay. Over the years its defences have been extended and improved as ownership swapped between the Welsh and Edward I. As a result, there is some dispute regarding which parts of the castle were built by whom. 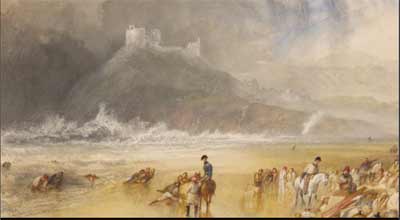 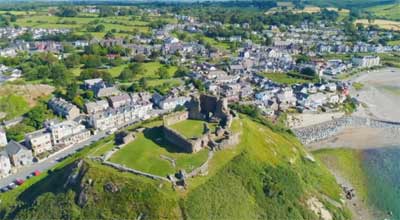 The gatehouse towers themselves do possess typical Welsh features. The semi-circular plan and D-shaped tower is characteristically Welsh and similar can be found at Castell-y-Bere, Dinas Bran and Ewloe. Those who argue for an English heritage point out that such a massive round towered gateway is rare among Welsh-built castles. However, CADW have come down firmly on the side of the Welsh! So that’s settled then. 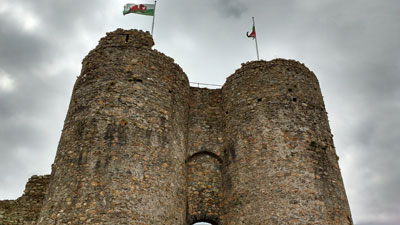 The climb to the towers is steep and long giving the Castle’s defenders ample opportunity to bombard attackers with all manner of missiles. Indeed the north tower, named the Engine Tower, held a siege engine, or catapult, which would have have made the ascent even more dangerous. If you made it to the gatehouse, arrow slits at the base of the towers would have made things uncomfortable even before you attempted the entrance. The entrance itself was protected by a portcullis and barred gate. Once you got passed the portcullis there would have been murder holes to contend with before you eventually managed to break through the gate to relative safety of the inner ward. 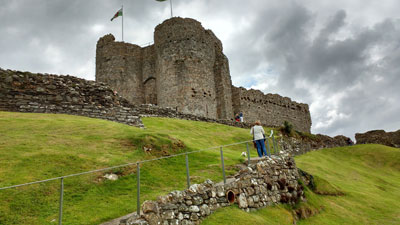 Despite these defences the castle did swap hands several times until it was sacked by Owain Glyndwr who led the last major Welsh rebellion against the English. Glyndwr’s men tore down the stone walls and burned the castle. You can see evidence for this in the fire-scarred south tower.

There are fantastic views of Cardigan Bay and Criccieth itself.  On a fine day you can see Harlech Castle on the other side of the bay providing your eyesight’s up to it.  Mine wasn’t! 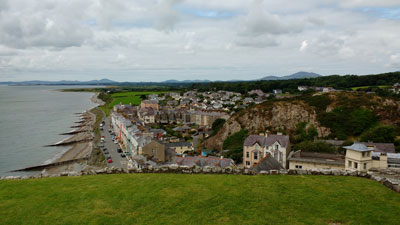 Directions to the Criccieth Castle

All children under 5 receive free entry.