As Barmouth is so big I couldn’t fit it all into a single post!  Here is the concluding post for Barmouth’s Heritage Trail.  Please let me know if I have missed something that should have been there.

Continue north along the promenade and you will arrive at the Bath House.  This is now a café but back in the early 19th century it offered seaweed baths to holiday makers within the building and also ran a series of ‘bathing machines’ erected in the sands. 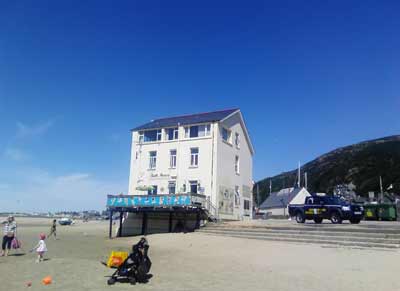 Head towards the main beach area and you may see a concrete walkway which is sometimes obscured by drifting sand.  Follow this walkway through the dunes for views of Ynys y Brawd.  This is also a popular spot for crabbing and sea fishing. 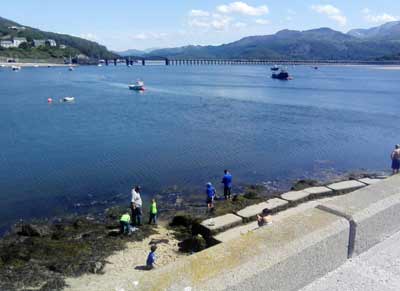 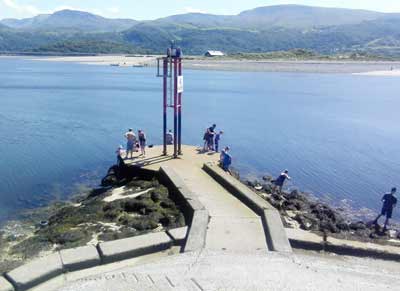 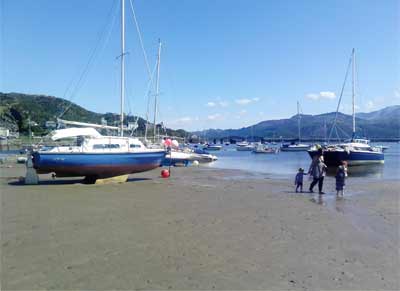 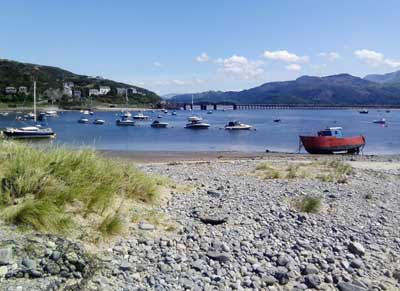 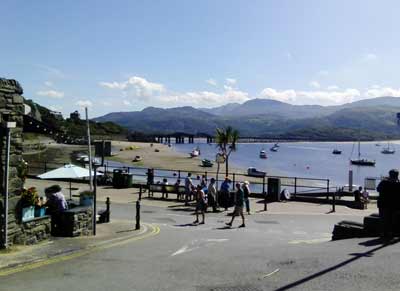 Return to the promenade and follow the path until you spot the railway station on your right.  Walk up the street, passed the station, and turn left at the crossroads.  Cross the road and turn immediately right.  You will see the church directly ahead of you but to actually arrive you follow the road north as it loops back on itself to the right. 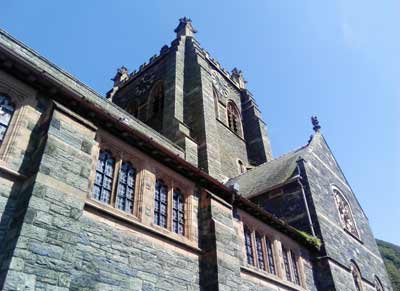 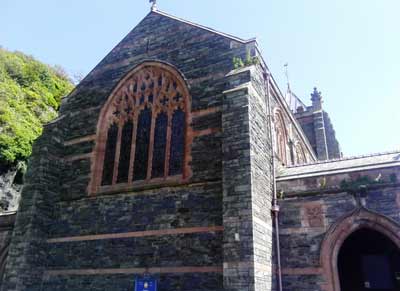 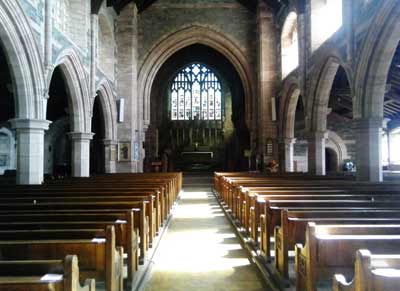 Barmouth’s original church was based at the harbour but with the arrival of the railway, and with it the influx of tourists in second-half of the 19th century, a much bigger church was needed.  Completed in 1891 it owes it existence to the philanthropy of Mrs Sarah Perrins, of Lea and Perrins Worcester Sauce fame.

Dinas Oleu (‘Fortress of Light’) was a Roman-period hill fort that was gifted to the National Trust by local worthy Mrs Fanny Talbot.  This donation is notable as it was the first property that was offered to the National Trust when it was formed in 1895.  Fanny was a friend of Octavia Hill, a co-founder of the Trust, and is quoted as saying, ‘I have long wanted to secure for the public forever the enjoyment of Dinas Oleu and wish to put it in the custody of a society that will never vulgarise it or prevent wild nature from having its way’.

Follow the path on the sea-ward side of the church passed a couple of houses until you reach a rock with a footpath sign.  Take the path behind the rock and you will emerge on to a small road.  Turn left and venture uphill.  Ignore any left forks and you will arrive at an open area where there is an information board on Dinas Oleu.  Take a breather and enjoy the views over Barmouth towards the estuary.

Unfortunately, this is not your destination as Dina Oleu is a couple of hundred metres further up the hill – you have been warned.  Behind the information sign you will see a path snaking up the hill.  Take the path ignoring the right turn at the first fork.  After a few minutes you will come across a reassuring stone dedication.  I found it reassuring as it at least meant I was heading in the right direction.  There is also a well-placed bench.  The path will turn sharply to the right.  Continue uphill ignoring any left or right forks and the path will turn sharply to the left.  You will shortly reach Dinas Oleu. 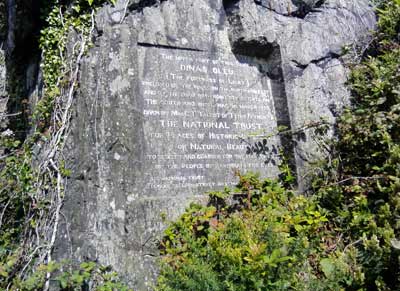 Take a few minutes to enjoy the views as you have definitely earned it!  I am not particular fit and I was fair tuckered-out by this point.  When you have suitably rested and your heart rate has returned to something resembling normal, then you can begin your descent to the Frenchman’s Grave. 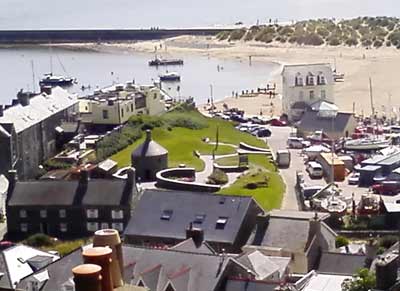 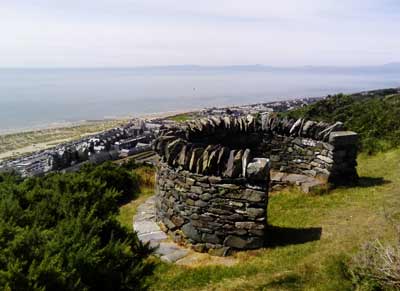 Go back the way you came and bear left.  Climb over a gate and then turn right through another gate signposted ‘Frenchman’s Grave’.

The Frenchman in question was Auguste Guyard who came to Britain with his daughter in 1871 escaping the Franco-Prussian War.  He spent the remainder of his life tending the slopes that now surround him planting herbs, flowers and vegetables.  His final wish was to be buried where he lies today.

Descend back to the Dinas Oleu noticeboard.

With the sea to your right follow the path down through the Old Town.  You will be greeted by delightful cottages aligned cheek by jowl in higgledy-piggledy streets.  There is no set route and part of the fun is to explore this area at your own pace as I have never seen anything quite like it before. 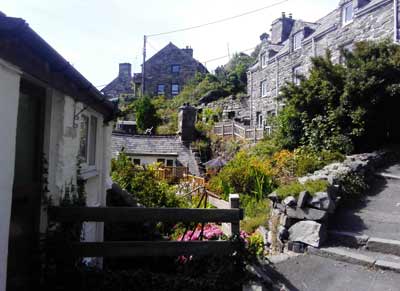 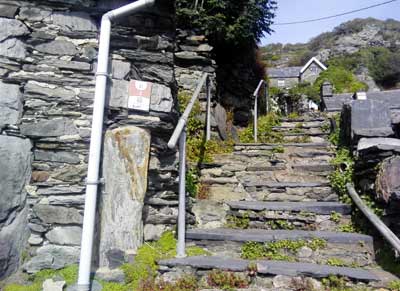 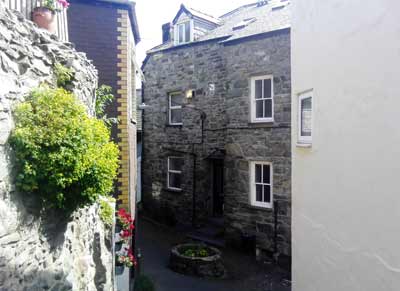 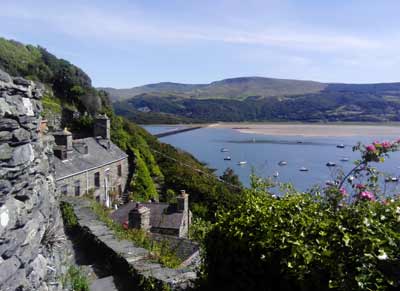 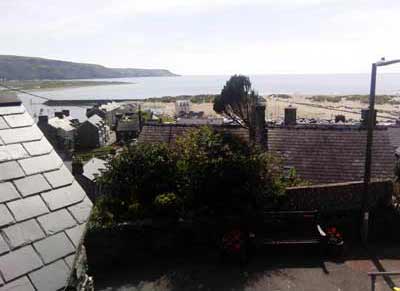 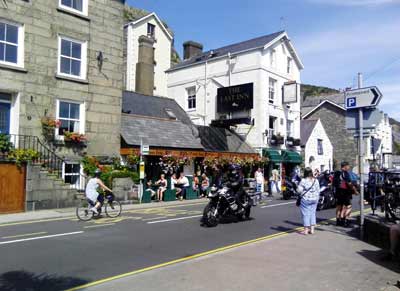 When we came to the end of our tour we exited the Old Town and re-entered the Muggle world via an alley that ran alongside The Last Inn.  A truly magical experience.

Barmouth is the major seaside resort in west Wales but it offers far more than just a good beach.