When you think of Barmouth, what images spring to mind? Whatever your age there’s a good chance that they’ll include donkey rides, deckchairs, candy floss, wind brakes, sandcastles, crabbing, ice-cream and the dodgems. When we visited in August Barmouth had all that together with yapping dogs, running kids, stressed mums and dive-bombing seagulls.

The beach is a fantastic place for families as there’s always something to keep the kids amused – parents just need to hand over a fishing net, point out the nearest rock pool, and the little ones will be gone for hours. Once they are done with that, there’s sandcastles, or beach rounders or cricket. It doesn’t have to cost anything to wile away a day on a British beach as long as you have acquired a taste for sand peppered picnic sandwiches. 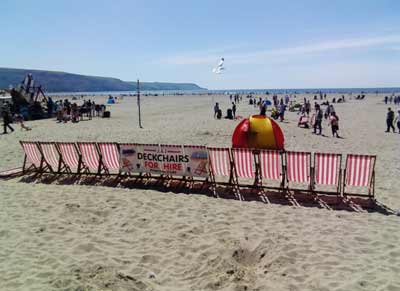 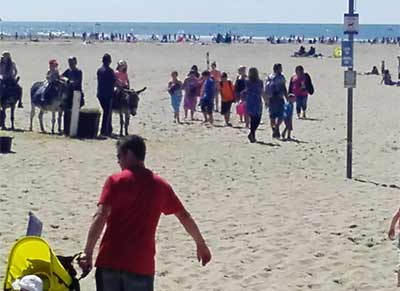 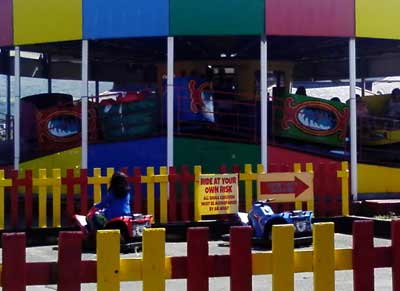 If you are a more mature visitor, e.g. us, Barmouth doesn’t appear to have anything else to offer but scratch beneath the surface and it’s stuffed full of history and unusual sights that’ll easily fill-up a day trip as long as you are up for a bit of a walk.

Travelling from Tywyn to Barmouth by car takes around an hour because of the diversion enforced by the Mawddach estuary. If you are visiting during the school holidays, then you can easily add-on 15-20 minutes searching for parking on one of the large car parks that parallel the front. Hazard the little available street parking and you risk returning to find that some berk has blocked you in. 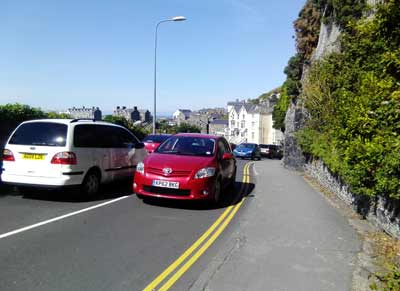 Told you it was busy!

But there is a better way: park on the Morfa Mawddach station (post code: LL39 1BQ) off the A493 and spend the half an hour you have saved on your travelling time walking across the preserved railway bridge into Barmouth. The views are fantastic, the walk relaxing, and you get to save the £3+ it costs for parking. Any visit to Barmouth should include a walk over this iconic railway bridge and this way you have ticked-off one of the must-do’s right at the start. 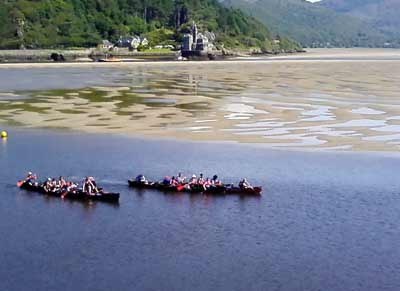 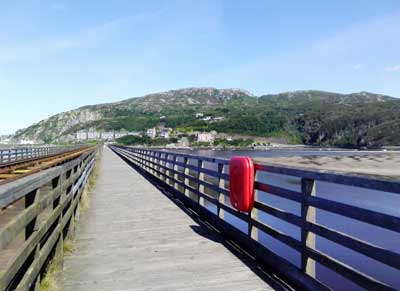 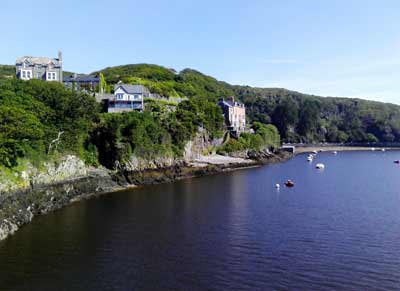 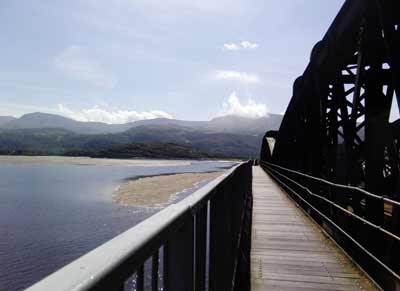 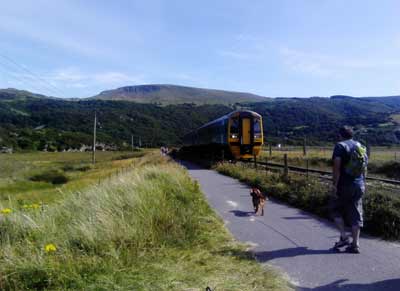 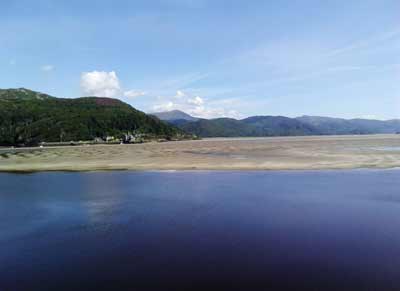 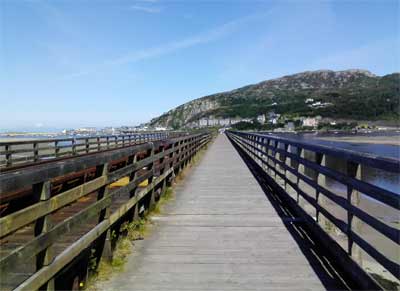 Now that we have got you to Barmouth, what to do? Well we followed a truncated version of Barmouth’s heritage trail which provides a fascinating glimpse into Barmouth’s sea-faring past. Turn left as you exit the bridge and follow the road as it bends away first right and then left into Barmouth. After a short walk you will come across the Last inn. Cross the road and to the left of the railway bridge is Frank Cocksey’s ‘The Last Haul’, a marble carving depicting three generations of fishermen hauling in their nets for the last time. 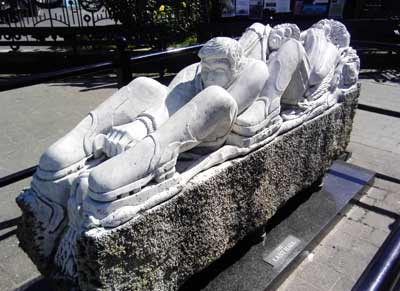 The marble used for the carving was rescued from the brink by local diving enthusiasts in 1978 that discovered, what is now known as, the Bronze Bell Wreck. The marble originates from the famous Carrara quarry in Tuscany. Why a vessel carrying marble with such providence was sailing off the coast of Barmouth is a mystery that remains to this day.

Once you are done admiring the carving, continue under the railway bridge into Barmouth’s harbour side area where you will find numerous bars and restaurants together with ample seating from which you can enjoy views over the estuary.   As you emerge from under the bridge you will almost immediately encounter our next stop: the Sailors’ Institute.  Built in 1890 by Canon Edward Hughes the building houses a Victorian reading room and billiards table so that sailors’ families could have somewhere to get news of their loved one’s voyage by reading the Shipping Gazette or Lloyd’s List.  It still carries a copy of that day’s newspapers if you fancy catching-up on the news together with a treasure trove of photographs and artifacts providing a glimpse into the lives of the sailors and their families. 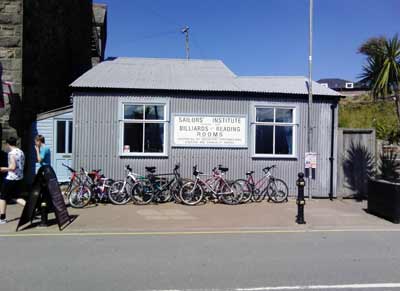 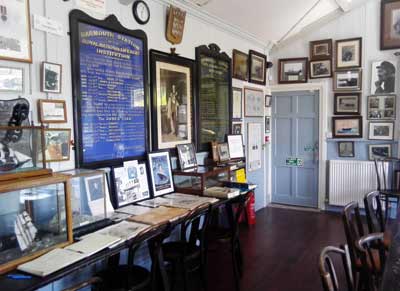 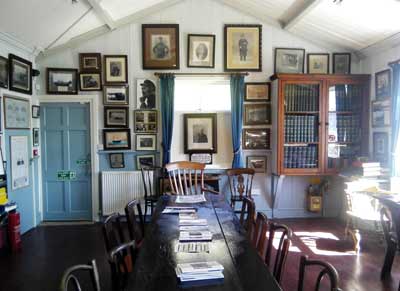 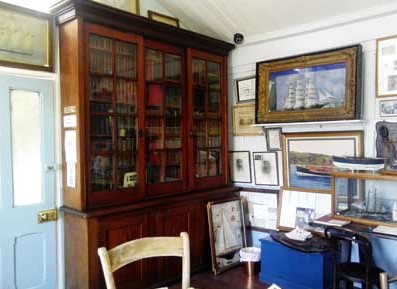 The Institute is open every day during the summer and is free to enter. During October to April it is closed on a Sunday. If you do visit, remember to sign the visitor book.

Exit the Sailors’ Institute and turn right.  A short walk will bring you to Davy Jones Locker.  Turn right around the café up a slight incline to a set of steps probably hidden behind a car – did I mention the parking?  This first floor medieval town house, the oldest building in Barmouth, has a fascinating history.  Built sometime between 1460 and 1485 by Gruffudd Fychan during the War of the Roses it is said to have been occupied by Jasper Tudor, Earl of Pembroke, and uncle to the future King Henry VII.   It is from this very spot that Jasper is said to have plotted the overthrow of his enemy, Richard III, the last of the Plantagenet dynasty, before the Battle of Bosworth in 1485 where the King was killed leading to Henry taking the throne and the establishment of the Tudor dynasty.  It is hard to imagine that this unassuming little dwelling, settled in a sleepy seaside town, played such an important role in our history. 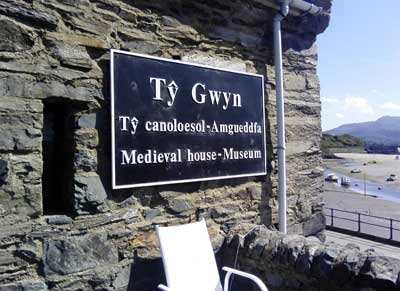 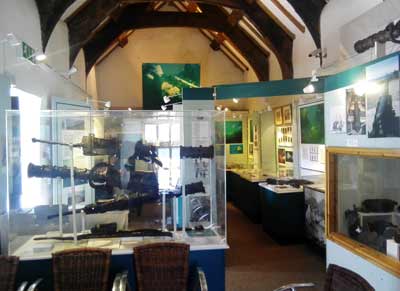 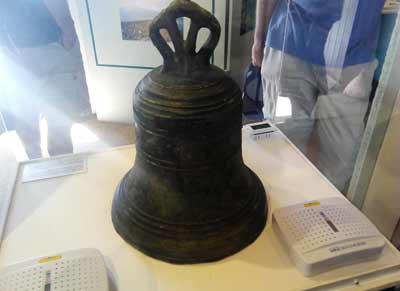 The building, described in a poem by the Welsh-language poet Tudur Penllyn as `above the salty beach and the foaming white lake of Barmouth below’, was thought lost and it was not until the 1970s that it was rediscovered and restored. It now houses the Bronze Bell Wreck.

The museum is staffed by volunteers and opens around midday-ish every day during the summer (April to October). Amongst the fascinating exhibits are buckles, shot, cannons, cannon balls (spiked, joined by chain and bar), pistols, rifles and, of course, the bronze bell. The bell is the oldest ship’s bell in existence – the date 1677 is clearly visible – and carries the Latin inscription ‘Laudate Dominus Omnes Gente’ (Praise the Lord All People).

The wreck from which the Bronze Bell was extracted is possibly Genoese and is believed to be the most important found in Welsh waters. What a 300-500 ton merchantman was doing sailing around the Welsh coast in the early part of the 18th century carrying a cargo of precious white marble from the renowned quarries of Carrara is open to question. The original theory was that it was destined for St Paul’s Cathedral as it was believed that the ship had foundered in 1703: there were no coins found dated later; in November of that year northern Europe and the British Isles was hit by a ferocious storm that raged for three days. As St. Paul’s was completed in 1708 it fitted the time-frame. However, this theory has been debunked by Channel 4’s Wreck Detectives in their programme on the site – the DVD can be viewed in the museum – who found that the ship had sunk 6 years later than thought. The destination of the ship, and its name, remain a mystery.

It is from this wreck that the marble used to carve ‘The Last Haul’ was rescued. Other exhibits in the museum, loaded cannons and the like, are more likely to have come from a still earlier wreck (circa 15th century) which lies beneath the Bronze bell ship.

Entrance to the museum is free.

Ty Crwn (The Round House)

Exit the museum and turn right. Find the break in the wall, possibly obscured by more parked cars, and follow the path to Ty Crwn. Built in 1834 this stone building acted as gaol for petty offenders and drunks.  Its circular design ensured that the devil would have no corners to hide in. Back in the 19th century Barmouth was a busy shipping port where sailors would amass either disembarking or awaiting their next voyage. Brawls were commonplace and the constabulary needed somewhere more convenient to lock-up miscreants than the nearest police station in Dolgellau. Costing £54 to construct the Round House has two sections separated by a curtain wall: one for men and the other for women. The interior has been partly restored and houses two figures depicting what life would have been like for a prisoner in the 1830’s. 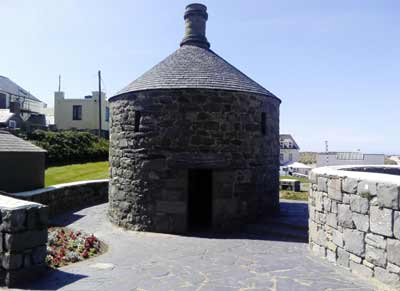 Exit the museum and turn left back to the harbour road and turn right. A short walk will take you to Barmouth’s Dolphins. Erected in 2007, the water feature was entirely funded by the local community and cost £10,000 with the aim of raising the town’s tourism profile. The statue is intended to highlight the fact that Cardigan Bay is home to one of only two breeding groups of Bottle-nosed Dolphins around the UK coast. It’s not unusual to see them on a daily basis in pods of up to 20 from early Spring through till Autumn. They are mainly seen between May and October with their numbers peaking in September. Keep an eye-out near the Dyfi and Dysynii estuaries as dolphins show a preference for strong tidal currents. Young calves can be seen during the summer in the shallower water closer to land. 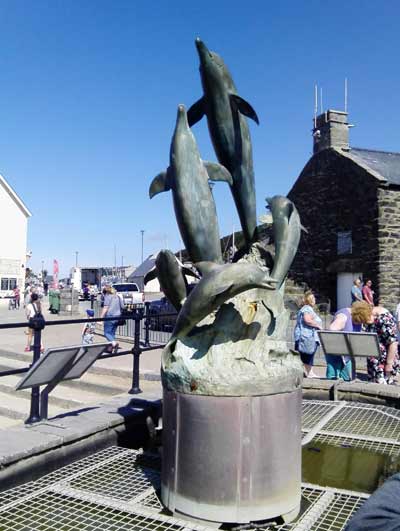 Opposite the statue is the Harbour Master’s Building. 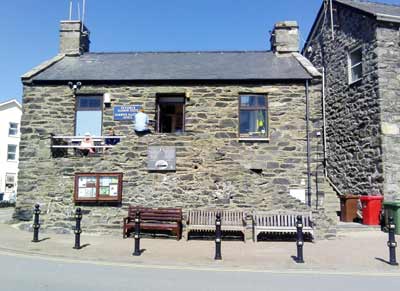